An Ear for Foreign Languages

I can remember when my son was about 2 years old and one day we were driving into the city, Columbus, and on the way, he was sitting in his car seat chattering away. I thought, at first, that he was just talking nonsensical toddler speak.

Then I recognized that he was counting… in German. I recognized it as German because I had taken a German course in high school and still remembered the alphabet, numbers and a few phrases. To say I was stunned would be an understatement because I had never taught him to count in German.

Disclosure: This review of Middlebury Interactive Foreign Languages means that I received the use of the foreign language course for free and am being compensated for my time. This post contains affiliate links to 3rd party sites where products purchased may result in paid compensation for this blogger. As always what I share about the product is from my own perspective, and are my honest opinions of the product.

A few weeks later, our babysitter asked me if I knew he could say the French Alphabet. She had heard him saying them and recognized it from her own high school French class. Again, I was stunned because I hadn’t taught it to him, and I didn’t even know it myself.

So we began to investigate and discovered he had watched a video at a friend’s house that included alphabets and numbers from languages around the world. We soon bought the video and he loved watching it. This was before we began to really understand how his gifted mind works.

A couple of years later we enrolled him in our local Montessori school. After few weeks one of the teachers who was a German immigrant heard him counting in German. She was surprised and told me that his pronunciation was das gut, that means good. She asked permission to teach him some additional German lessons. He learned a few more words and phrases. After his time in preschool we began homeschooling.

I had intended to continue with language lessons and for a time I picked up some books from the library. However, not being fluent in the languages, I struggled to teach the lessons and over time foreign language fell by the wayside.

The Need for German Language in Our Homeschool

A couple of years ago the leaders of the congregation where we worship announced that they were going to begin a youth mission work in Thun, Switzerland. The goal is that every 2 years a group of teens and young adults will travel to there to work with a local congregation. In just a few short years my son will be eligible to join the team.

The region where Thun is located is predominantly a German speaking region. So I want to build a language foundation for my son. When I was presented with an opportunity to review Middlebury Interactive I jumped at the chance. 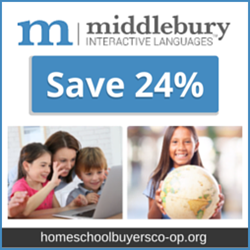 We are using the middle school German course that is not teacher supported. I find that the lessons are easy to use, instructions are clear and simple for my son to follow. At this level, I am comfortable with not using the teacher option, I can imagine that upper levels having a teacher will be very helpful with pronunciations and protocol.

Each lesson has a series of activities designed to introduce new words and phrases, reinforce the goals of the lesson and offer an audio ding so the student can hear the correct pronunciation and usage. The best part of the program is the Speaking Lab. This Lab is an interactive lab that allows the student a chance to hear the word or phrase, then record themselves saying the word/phrase, then go back and compare the two. In this way, a student can hear for themselves if they need to correct their own pronunciation.

I really like that this course teaches not only the spoken language but also the reading and writing of the language. The German language is spoken in two ways, formal and informal. I appreciate that the lessons include instruction in both and how to properly use them.

The lessons are available per semester. There are 85 lessons in the first semester of the middle school German course. We are currently using the program 2 times a week and easily able to do 3 lessons per session in about 45 minutes to an hour. We will be able to complete a semester in about 14 weeks. Of course, as a homeschooler, you can determine your own schedule for how often you want to add in the course.

Middlebury Interactive is offering a 10% discount for homeschoolers for your initial order. Simply use this code; HomeSchoolFirst10 at checkout.

Follow Middlebury Interactive on you favorite Social Media Channel. By connecting with them you will get regular updates, information about their products, encouragement for learning foreign languages as well tips and ideas.

If you are looking for a foreign language option for your homeschool. This one is at the top of my I’ll recommend that one list. The ease of use coupled with the interactive elements of Middlebury Interactive Languages, makes this a great resource for homeschoolers.

My son is enjoying learning a new language and I love that I can lay some fundamental foundations for a future that might include overseas missions work.

Want to Know even more about Middlebury & Teaching Foreign Language in Homeschool? Watch this iHN Hangout.
You May Also Enjoy

4 Replies to “Learning the German Language in Homeschool”