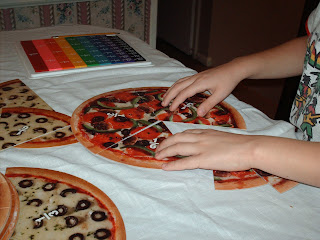 Sometimes, we have to think inside the box in order to learn outside the box (curriculum box) to accomplish our educational goals. This week it was a pizza box and a graham cracker box.
Jonathan is studying fractions in math. He is learning to add and subtract fractions with unlike denominators, mixed numbers and simplifying. A friend of our, the great Mrs. Wazoo, let me borrow a box game of pizza fractions. It was just the thing to help assure Jonathan that he was on the right track with his problem solving. He would do the math, then use the fractions to check to see if he was simplifying correctly. In other words if he came up with 1 4/8 and simplified to 1 1/2 he would take 4 1/8th pizza slices and lay them on a 1/2 slice to see if they were the same. Worked out very well, because it put the math into concept while giving him a good visual for future reference. 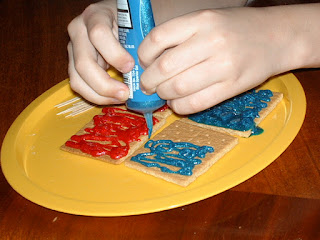 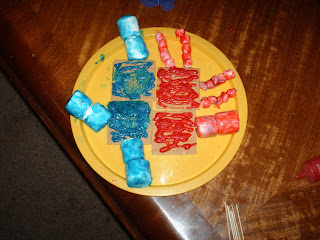 In Science, we are learning about the human heart. After reading the material through the week and doing several worksheets on the hearts structure and how the blood flows through it. I had him make a model of the heart using graham crackers, red and blue colored frosting, marshmallows and toothpicks.
Two graham crackers were colored blue while two were colored red, the blue represented the Right Atrium and Ventricle and the Red represented the Left Atrium and Ventricle. The Right side of the heart being blue because it receives blood from the body that is deoxygenated, then pumps to the lungs, before coming back into the Left side which is now red, or oxygenated.
The marshmallows, were stacked on toothpicks, and also colored red or blue, to indicate which veins and arteries carried which type of blood, deoxygenated or oxygenated. Again this project gave him a visual to properly put in his mind the flow of the blood through the heart. My hope is that when we are finished with this unit,
I can pick up a cow heart from the local butcher to dissect with him. If I can’t find a cows heart, I know I can get a chicken heart at the grocery store. We will have to see what happens next week.

2 Replies to “Learning outside the Box: Of Pizza and Crackers”