I don’t always toot the horn over accomplishments. I try to live humbly. But on Tuesday I wanted to shout from the rooftops because my Little Man achieved his Proficiency Badge in Algebraic Order of Operations at Khan Academy. He’s achieved several badges,  but this is the one that led us to Khan Academy in the first place. So I am very excited for him.
He and I are loving Khan Academy. For me, I love the freedom that I have in watching him learn and grow in his knowledge of math without feeling pressured to be the one to have to teach in areas that I am not proficient in. It is a super great bonus that this amazing resource for teaching math and other subjects is entirely FREE.
Let me back up a bit and fill you in. Little Man is 9 years old. He’s been zipping through math at a high rate of speed and last year finished up with 6th grade Arithmetic. For this year, I knew in my heart that he was ready for Algebra, even though every one I talked to said, ‘take it slow, you can do 7th grade math or even pre-algebra first.’ I did a lot of research. I looked at a lot of homeschool curriculum on the market. I went to convention and sat down with several publishers and even talked to the experts at Prufrock Press about my Math gifted son, and came away knowing with out a doubt that this was the year for algebra.

We started the year off well enough, using an old school text book. Really, it was the best book option for him. I had heard about Khan Academy and had done a minimal amount of research and decided to keep it in mind in case we got stuck. Then I would use it to supplement and build skills. We went through the first lesson, integers, very quickly, breezed through rational numbers as well as exponents with no trouble at all. I thought he was doing well with order of operations until he did the unit review. Now when I say Little Man was struggling with this concept what I mean is that he missed 3 problems because he didn’t know exactly which order to calculate in.

That’s when we logged on to Khan Academy to watch supplemental video’s and practice some additional problems. Little Man is not very patient. He also has tendencies of over-excitability which is very normal for children with gifted and talented abilities. So when he misses 1 math problem he becomes very upset. Out of respect for him, his emotional development and his trust in his momma, I will not go into detail about this. He does however, become overly emotional when missing just 1 problem. The goal oriented, performance based award system designed on Khan Academy is both a blessing and a curse for my over-excitable child. So once I saw that he was getting too anxious about getting every Order of Operations problem RIGHT. I decided to change tactics.

The program starts with basic arithmetic. You know, 1+1=2. So I decided to go backwards with my son and help him to build up his confidence in his own abilities. I let him explore the program. I let him choose which skills he wanted to work on. I set up his own profile so he can log on and off for himself. I have my own profile where I can watch as his “coach” and keep track of his progress as well as his struggles.

The thing that is so different about this program is it is designed to recognize where the struggles lie, and then it automatically adds problems into the lessons that reinforce areas that need to be worked on. As a parent/teacher this makes me feel good knowing that he won’t be missing key areas of learning. As the child becomes stronger in certain areas, the software rewards them with a badge. The badges earn points and the point buy new Avatars. When a child becomes proficient in one area of learning they are awarded with a Master Patch.

The program is set up surrounding a “Knowledge Map” which guides the student through their learning. They are not limited by this map. You can jump as far ahead as you want. Little Man, chose to jump ahead to Prime Factorization. He completed it very quickly and then the software, opened up additional portions of the “Knowledge Map” thus making Little Man more confident in his ability. 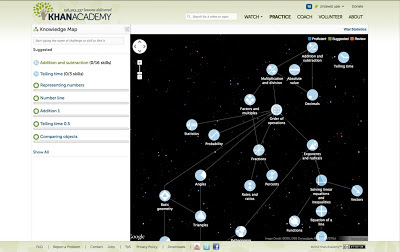 So, he is enjoying the gathering of the badges and awards, he has been quickly moving through these easier lessons and obtaining proficiency as he goes. I have worked out a system where, I determine the skill I WANT him working on, and then I set goals for him. Once he does a few exercises in MY required lesson, then he can choose the lessons he wants. His “Knowledge Map” probably would look quite eclectic to a professional teacher, but I know that my son is accomplishing great things because he is spanning multiple levels of learning, all the while building his confidence.

Doing this has most definitely eased his anxiety level. He feels he has some control of what he is working on, while I know he is being challenged in areas that he needs to be learning. That being said, I also can’t just leave him at the computer and walk away. Because of his over-excitability, I have to keep watch to see if he’s starting to get anxious. That’s when mom/teacher steps in and helps him to slow down, and take each problem step by step.

It won’t be much longer before he will have shown proficiency in all of the elementary arithmetic areas and the software will move him forward into the secondary math lessons without me adding them in as goals. So I’ve decided to just let it be and let him both learn and enjoy the process.

If you are interested in Khan Academy here are a few facts:

Here is a video which explains far better than I about how the program works, what is available and how you as a parent or teacher can utilize it in your classroom. What started out as a supplement for Great Peace Academy is now our Math Curriculum.

This review is entirely formulated from my own opinion and usage of the program. I am not recieving any financial or other comensation for this review. I am simply sharing with my readers my love for Math at Khan Academy.

Update: Khan Academy has undergone several updates since this was originally posted. We still love and use it, just be aware that the functionality has changed some, see the Khan Academy help resources for more information.