This has been one of those jumbled, schooling when we can kind of weeks.

Monday we were prepping for the luncheon that Little Man and a few other homeschool children form our congregation hosted for the older single women.

Tuesday was the day of the luncheon. It was beautiful watching Little Man and his friends, open doors, take coats and get drinks for those ladies. It was so special seeing the smiles light up the ladies faces as they were catered to from the first course, to the dessert course. Then the pride in a momma’s heart as each of those children stood before those women and spoke for the first times in their lives. The oldest boy, welcomed the ladies and offered prayer for our meal. Then each of the 2 girls read scripture. One read Joshua 24:15,  and the other read from Ecclesiastes 3:1-8. Little Man read a poem “Put a Poem in your Pocket” by Beatrice Schenk de Regniers. Afterward, Beloved and those beautiful little children washed and dried every pot, every plate, every fork, knife, spoon and glass while the mom’s organized everything back to their proper locations.

Overall it was a good day. But, I wouldn’t be fair to my readers if I didn’t share the emotional intensity that Little Man experienced. There is a part of him, that perceives the world around him in a hyper emotional state. It is a part of his physical make up. It is how his brain works. Somewhere in all of the planning I seemed to have failed to let him know that he AND the other kids would be serving these women. He thought he was serving all of them, especially his dear friend Ms. Joyce. So when one of the other kids got her a glass of water, he got upset. At the time I didn’t understand what the big deal was. He was quite upset and later he explained why. Out of respect for his privacy I won’t share the details here. What I came to realize though, for the first time, was that even though what he thought was true wasn’t the reality of things, he said, “But, it feels real.” That was when I realized… The way he perceives the world is his reality. It isn’t something he can change, it is rather something he must learn to navigate in this world that we live in. Self perception is difficult for most people to learn about, but for a child whose brain works in hyper drive that self-perception is magnified. Learning how to manage those emotions is much harder and learning to deal with it in the moment is much more difficult. It is who he is. For those of you who may be dealing with a similar situation I recommend reading Emotional Intensity in Gifted Students by Christine Fonseca.

He had piano practice in the evening. He’s prepping for his recital next Tuesday night. He is playing a portion of “Danny Boy” and all of  “Legend of Madrid.” He isn’t happy about this. He doesn’t feel like he has prepped enough for “Danny Boy” which is true. That isn’t because he hasn’t wanted to practice but rather the assignment came late for him and the piece is a tougher piece than he has had in the past. I know he can do it. It is times like these when his perfectionism becomes very apparent. He works really hard at his piano assignments, but if he doesn’t ‘get it’ within the first few plays he decides it’s too hard and he wants to stop and keep going at the same time. He wants to keep going but ONLY if he can play it perfectly. If he misses a note or a beat, he gets very upset and wants to quit.

Wednesday, we went back to school with some Spelling, Latin, Spanish and German.

Thursday was another special day. After some regular lessons and piano practice Little Man took Ms. Joyce out to Applebees for another “date.” Now for those of you who are not regular readers of my blog, Ms. Joyce is Little Man’s special grandma. We believe it is important to train up our boy in the proper way to treat women. So he occasionally get to take Ms. Joyce out on a date, where she gets to spend time with him. She is able to remind him of proper behavior without mom and dad there to do it for him. He gets to feel like a big boy when he is given the check and has to pay with his credit (gift) card. At the same time, this momma and daddy get to have our own date night. I love how excited he gets when these opportunities come around. 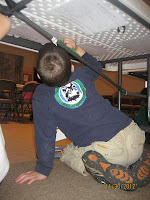 Friday was our the last session before winter break for our homeschool group. Today, they finished up the Italian Culture class taught by my friend Elsa whose family has been missionaries there for over 60 years. They took a virtual tour of Venice, Florence and Rome. They learned about the architecture, and the carnivale. They also got to explore some of the art: For instance when studying Rome, they had the opportunity to paint above their heads. The teacher, taped a black line drawing rendition of Michelangelo’s “Creation of Adam,”  on the bottom of a table and they were then able to color the sketch from underneath. Friday, they were able to use clay and sculpt whatever form they chose, similar to many of the statues seen throughout Italy. 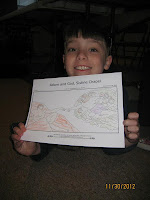 Following the Italian class, the kids had activity time and had a blast trying to pull apart to phone books which where fanned together. Friction lesson for those of you who aren’t aware of this fun experiment, you can watch this You tube video Friction Phone Books Experiment by Myth Busters. Then they played a game where they got to stomp on balloons, which I’m sure was quite a blast. 😉

Saturday night is a fellowship banquet at our congregation which I am looking forward to.

Overall, this week has been filled with many opportunities to “socialize.” He has had his own chances to learn his own way and at his own rate. He keeps grabbing one of the atlases that I placed in his previously updated bedroom and studying the various aspects of each state. He also has taken it upon himself to re-write scripture. I was both surprised and delighted by that. I may at the beginning of the new year provide him with some nice journals and let him have some school time to scribe the book of Genesis. He continues to play a new game that he has called “Crazy Machines” which is a game about engineering and problem solving. I struggle to know how to find balance between letting him learn his way and teaching him the core subjects that are expected.

I am prayerfully keeping in mind the families and students of the Newton Ct. school. There truly are no words that can be spoken about this tragedy.