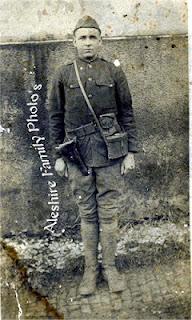 This is my grandfather. J.H. Aleshire. He served in World War I. Yes, you read that right. The FIRST World War.

He was a Pfc, Company H. 18th Infrantry, 1st Division. stationed in France and his regiment was imbedded with a French regiment 21st patrol company, 272nd Regiment, French Infantry.

He was awarded the U.S. Silver Star twice and the French Croix de Guerre (Cross of War) twice for his bravery in combat during 2 separate occasions.

The first was for volunteering for a patrol led by the French Infrantry and displaying “great bravery and profound disregard for danger during the entire action” June 13, 1918.

The second was for his distinquished conduct  during the St. Mihiel Salient which took place on Sept. 12-13th 1918.
Which I have learned was an especially bloody battle.

I did not get to meet this man. He died in 1957 the year after my parents were married. I didn’t come along for another 15 years.

In honor of Memorial Day I remember my grandpa and his service to this country while in the European theater.