I’ve recently been thinking a lot on this subject, Worship. I’ve been reading through the book of Exodus with a group of women on facebook. We are seeking to dig deep into the meat of God’s Word. Our goal for this month is to seek out shadows of the New Covenant in the book of Exodus. We want to see how the Old Covenant is a reflection of the New.

For instance, in the Old Covenant God designated a very specific priesthood, from the tribe of Levi. Aaron and his sons were set apart to be the priests of God Most High and serve Him in the tabernacle and later the temple. The other sons of Levi were to be set apart as servants also, they served the priests in their duties. This tribe, the tribe of Levi, did not receive an inheritance in the promise land. They were a holy tribe set apart to serve the LORD God.  It was only from the line of Aaron that men were to be consecrated as priests. They were to perform the duties of a priest by offering sacrifices upon the altar, they were to be consecrated to the LORD, by ceremonial cleansing. They were to wear specific garments which were designed by God Himself. They were to make sacrifices twice daily, every Sabbath, and during the holy festivals. 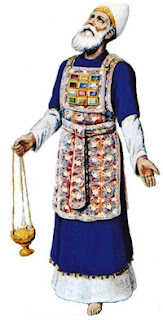 One Priest, starting with Aaron was to be designated as the High Priest. This priest took on the responsibility of the people. It was his job to offer sacrifices or to see that they were done properly. This High Priest was given the specific task of wearing the breastplate upon his chest, this breastplate bore the names of the tribes of Israel. Once a year this High Priest was to offer a special sacrifice. He was to bring 2 kid goats and one bull ram. He was to sacrifice the bull, then cast lot’s upon the two goats, one lot fell for the LORD, the other for the scapegoat. The scapegoat was to be a living atonement for the sins of the Israelites, while the other goat was to be offered for a sacrifice for the sins of the Israelites. The bull ram was offered for Aaron’s (or the high priests) sins,  the goat for the sins of the people. Then He was to take fire from the altar into a censer, he was to take incense from the altar of incense and blood from the bullock. He was to enter behind the veil which separated the Holy Place from the Most Holy Place. Then he was to sprinkle the blood of the bullock on the mercy seat, which was the throne of God. This is how he made atonement for the people. If He failed in any portion of His duty, if he offered strange fire or if he failed to wear the proper clothing, or if he failed to meet any requirement, he would die.

These are descriptions about how the Israelites were to worship God Most High. I must admit, for years I have read through these descriptions regarding the Old Law, and I couldn’t understand why God would require such a type of worship. It hasn’t been until I’ve been reading through seeking out these shadows that I now recognize the anti-type in the worship that Christians perform in the New Covenant. I see the correlation.

We too have a priesthood, (I Peter 2:9) “But you are a chosen generation, a royal priesthood, a holy nation, His own special people, that you may proclaim the praises of Him who called you out of darkness into His marvelous light,” We are the priesthood of God Most High.

We have a High Priest although He was not from the line of Levi but rather the line of Judah. (Hebrews 6:19-20) “This hope we have as an anchor of the soul, both sure and steadfast, and which enters the Presence behind the veil, 20 where the forerunner has entered for us, even Jesus, having become High Priest forever according to the order of Melchizedek.” Here we also see that he entered the Presence behind the veil, (Matthew 27:51) “Then, behold, the veil of the temple was torn in two from top to bottom; and the earth quaked, and the rocks were split,” (Also found in Mark 15:38 and Luke 23:45). This tearing of the veil occurred when Christ on the cross, cried in a loud voice and gave up his spirit, (Matthew 27:50). This is significant, as the high priest was to enter behind the veil to sprinkle the blood of the atonement sacrifice, so Jesus the Christ bore the iniquity of us all (Isaiah 53:6)  being our atonement sacrifice gave up his spirit and upon his death the veil was torn, we now being of the priesthood “…have confidence to enter the Most Holy Place by the blood of Jesus, by a new and living way opened for us through the curtain, that is, his body.” (Hebrews 10:19&20) Do you see? The Veil, was a physical representation of the spirit of Christ Jesus. When his spirit was torn from his body so too was the veil was torn in the temple from top to bottom. Thus opening the way fro us to enter into the Most Holy Place to be in the presence of the Father.

When Aaron or the high priest entered into the Most Holy Place to make atonement sacrifice for himself and the people, he also had to take a part of the fragrant incense used on the altar of incense and burn it before the Lord. Under the New Covenant, we are told that the golden bowls full of incense which are presented to God in heaven are the prayers of the saints. (Revelation 5:8 and 8:3). Think about this, we are the saints, (Ephesians 2:19), so the incense that was offered under the old covenant was a type of prayer offered to God Most High, (see Luke 1:10-13), in the New Covenant the Anti-type Incense IS the Prayers of the Saints.

Just as The priest had to be cleansed through ceremonial consecration, the New Covenant also requires cleansing. (Matthew 28:18-20) “18And Jesus came and spake unto them, saying, All power is given unto me in heaven and in earth.  19Go ye therefore, and teach all nations, baptizing them in the name of the Father, and of the Son, and of the Holy Ghost:” (See also, Mark 16:15-16). In Acts 2:38 we see that on the day of Pentecost when Peter and the other apostles preached Jesus to the crowd at Jerusalem, they reached a point where the people were pricked to the heart and asked what they should do to be saved. Peter responded this way, “Repent and be baptized everyone of you in the name of Jesus Christ for the remission of your sins and you shall receive the gift of the Holy Spirit.”

Peter being given the keys to the kingdom, (Matthew 16:13-20),and having been instructed by Jesus to teach believer all things that He had commanded them. Matthew28:20 “Teaching them to observe all things whatsoever I have commanded you: and, lo, I am with you always, even unto the end of the world.  Amen.” declared to the people, which was written for us and our learning today, told us specifically what we must do to be saved.This cleansing through baptism is a reflection of the ceremonial cleansing which the priests of old had to perform to enter into the Most Holy Place was FOR the Remission of sins, that is, Forgiveness of Sins. Therefore without it how can one receive the forgiveness which is promised? For it is not by our own working of obedience, but rather it is through the working of God in baptism that we are made clean having been “buried with Him in baptism, in which you also were raised with Him through faith in the working of God, who raised Him from the dead.” Colossians 2:12

Just as the priests of old were given ceremonial clothing, we too are given clothing. (Galatians 5:26-27), we are clothed with Christ. Just as the priests of old were to worship God and present sacrifices we too are to offer sacrifices, but rather than the blood of bulls and goats, we are to be a “…living sacrifice, holy and acceptable unto God which is your spiritual act of worship.” (Romans 12:1).

This is one of those “Choose you this day whom you will serve.” (Joshua 24:15) kind of questions. But as for me and my house, WE WILL SERVE THE LORD. We will worship according to His commandments, we will worship according to His Word. Paul said, in Galatians 1:8 “But even if we or an angel from heaven should preach a gospel other than the one we preached to you, let him be eternally condemned.” The gospel as it was first proclaimed can be read, in Acts 2, but you can see the same gospel repeated in every conversion account found in the same book.